A northern-based, principal contractor has been named in the Sunday Times Top 100 Companies to Work For list at number 32 under the Sewell Group brand.

Illingworth & Gregory (I&G) Ltd, which has its headquarters in Huddersfield as well as offices in Hull is part of the team being awarded its eighth Best Companies accreditation and fifth appearance on the Sunday Times Top 100 list. 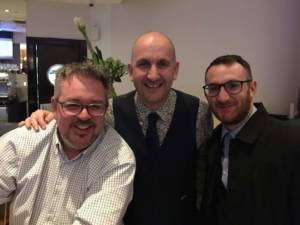 The contracting business, which currently employs 25 staff, has also contributed to the group maintaining its previous accolade of Best Companies 3 Star ‘extraordinary’ accreditation, which recognises the highest standard of workplace engagement, an area the group have seen an improvement on since their last listing.

Best Companies is the number one specialist for workplace and employee engagement in the UK and its survey, which was completed by staff, powers the Sunday Times Best Companies to Work For list.

Sewell Group has now entered the Sunday Times Best 100 Companies to Work For five times in the past 10 years, including 2020, and has been successful in making the top 100 every time.

Twenty of the team from various parts of the business all over the North of England, and with 320 years of service between them, travelled down to the glamorous award ceremony to hear where the business had placed on the UK-wide league table.

Glen Poskitt, head of technology, joined the team attending the awards evening after being awarded the chairman’s special prize at the company’s internal recognition ceremony, The Star Awards. He first started working for the company in 1982 as an apprentice bricklayer. He said:

“I was so very proud to pick up the award at this year’s Star Awards ceremony. It was an honour to realise all the fantastic things being said on stage were about me and I was really very moved to hear my name called.

“It’s representative of the positive experience I’ve had working here and it’s the reason I’ve stayed for so many years.” 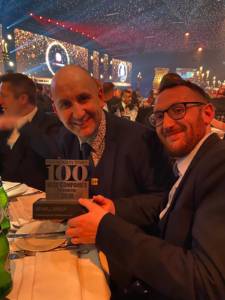 Staff across the business were asked for their opinions in the independent Best Companies questionnaire focused around their manager and team, personal growth, wellbeing, giving something back, leadership, the company as a whole and a fair deal for employees, with the results showing they feel happy, engaged and recognised for their efforts.

The feedback helps to shape a Best Companies Index score, which determines a company’s accreditation level and position in the Sunday Times Top 100.

Jo Taylor-Standley, Sewell Group office manager, has been with the business for eight years and was the second culture champion winner at the Star Awards. She said:

“This is the third time that we’ve secured a place on the Sunday Times Top 100 list since I’ve been with the business.

“It’s an amazing feeling, knowing what we’ve achieved by pulling together as one big team. It’s that teamwork and real family atmosphere that makes it such a lovely place to work.

“I’m feeling so proud and really lucky that I got to experience the live countdown to our number 32 position last night.”

At I&G we take a proactive approach in building relationships with the communities we work in.